Athletes’ achievements are often defined by their accomplishments on the field. But these triumphs also provide platforms for players to thrive away from the game. For some, that means pursuing outside business ventures or celebrity appearances. For others, giving back to their communities and cherished causes becomes central to their identities. 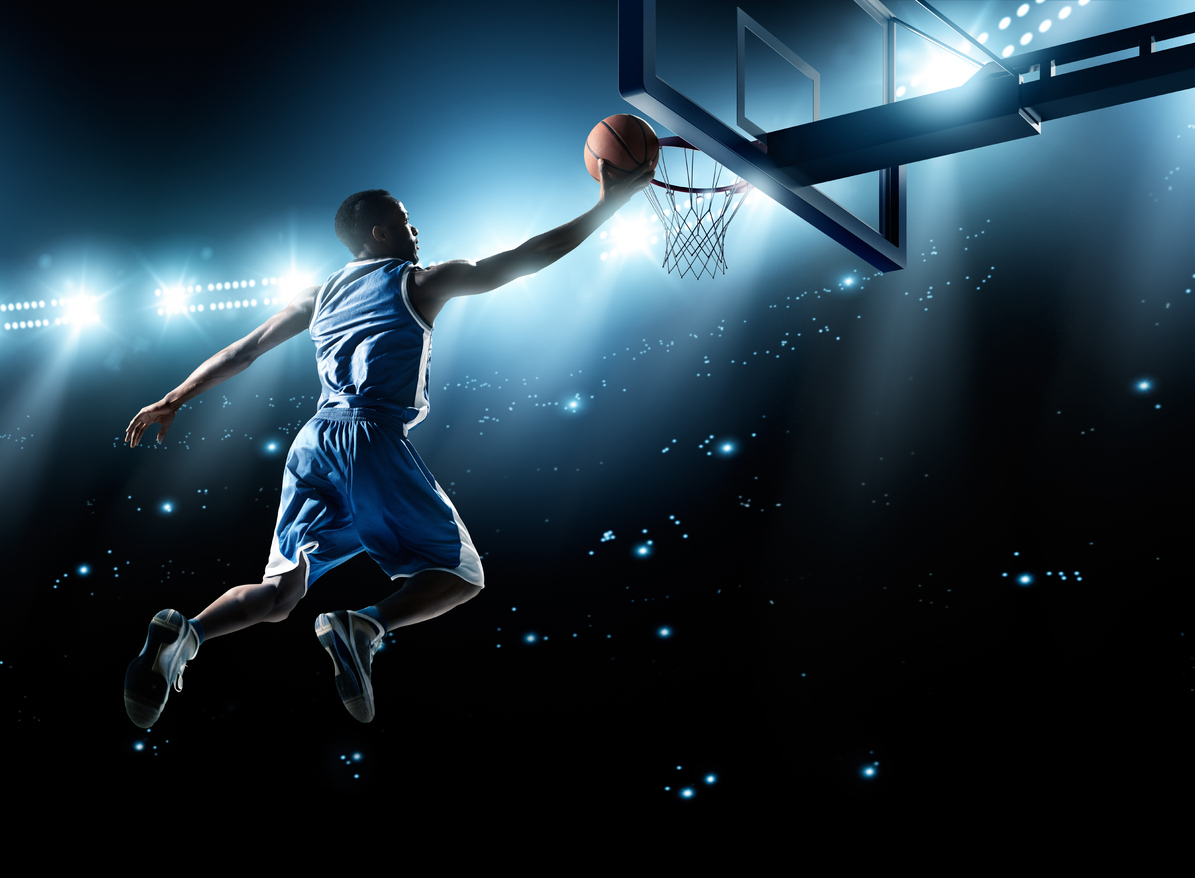 Successful athletes have used their star status to promote charitable causes for years, especially during times of great need—such as in the wake of a natural disaster. Houston Texans’ star, J.J. Watt, raised $37 million in 2017 to provide relief from Hurricane Harvey’s devastation. Others have established a more formal philanthropic strategy. While philanthropic approaches may differ, they all start with understanding how much to give.

Determining the “right” amount to give to charity is not as simple as coming up with an amount on the fly. It requires assessing the amount needed today to secure living expenses for the rest of the athlete’s life. Assets above that level can be spent on big, optional purchases (such as a beach house) or given to friends, family, or charity. Let’s walk through an example.

Mike, a 35-year-old NBA player, is in the final year of his contract and plans to retire at the end of the season. Over his 13-year career, Mike focused on his game, though he knows he wants to give back in some way once he stops playing. Yet since this will be his last year receiving a big paycheck, he’s concerned about giving away more than he can afford.

Fortunately, as a disciplined saver, Mike has accumulated a liquid portfolio worth $35.2 million (Display 1). Additionally, he believes that his endorsements will continue for the next several years. With income from his other businesses, he should be able to cover half of his annual lifestyle spending of $700,000 for the next 20 years. But Mike wants greater assurance. Based on his income and savings, how much does he need to secure his living expenses, and how much can he safely give to charity? 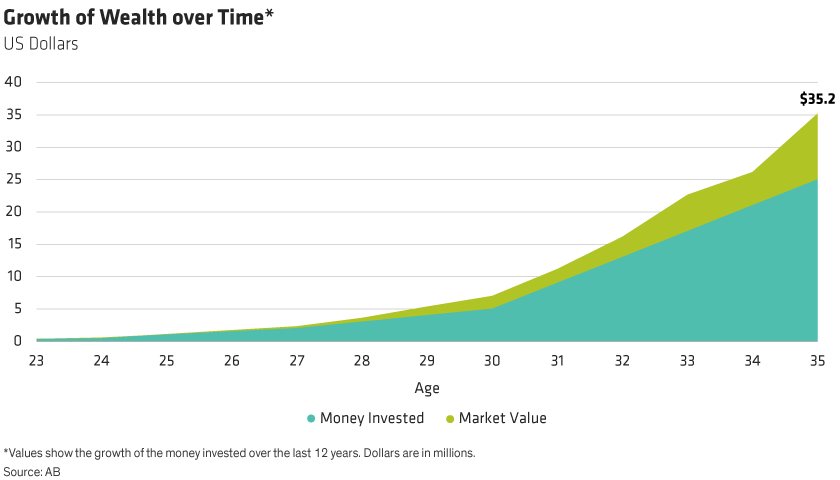 Using our proprietary Wealth Forecasting System, we project that Mike’s assets would grow to $43.4 million over the next 20 years—if he doesn’t make a $5 million gift—or $36.1 million ($7.3 million less) if he does (Display 2). After two decades, most of Mike’s other income would be winding down, and he would need to rely on his portfolio to sustain his $700,000 annual spending. We calculated that by age 55, the capital needed to maintain that level of spending would be $28.4 million, far below his projected assets. Mike feels comforted knowing that he should have the capacity to increase spending or make additional gifts to family or charity despite making a large donation. 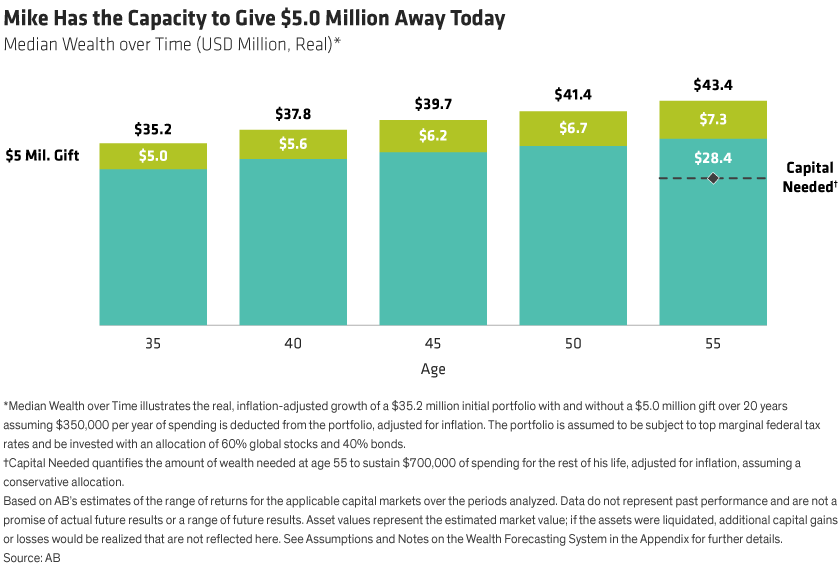 How, When, and What Should Mike Give?

After seeing the projected asset growth with and without his gift, Mike confidently earmarks $5 million for his philanthropic goals. With that decision made, he then works with his advisor to settle on a vehicle, timing, and which assets he should use to fund the donation.

Vehicle: Many athletes start foundations with good intentions but are unaware and often ill-prepared for the responsibility, complexity, and public scrutiny that comes with the day-to-day operations and decisions. Additionally, donations from foundations are not anonymous. However, athletes and other celebrities often prefer to ‘silently’ support certain charities. These drawbacks make donor advised funds (DAFs) more appealing for some.  Athletes, whether in retirement, nearing retirement, or in the prime of their playing days, create DAFs to support their causes with ease and without fanfare.

Mike decides to use a donor advised fund because it offers flexibility when giving grants without the hassle of establishing a private foundation. Importantly, he can also receive a large tax deduction in the year he gives to the DAF,* which would coincide with the last year of his contracted pay. He appreciates the latitude, too—though he is contributing the full $5 million all at once, the DAF doesn’t have to donate all of it to charities that same year.

Causes: Mike creates a mission statement to guide his philanthropy: 70% of his annual grants from the DAF will support three causes—K-12 education, social justice, and environmental initiatives—and the remaining 30% will fund appeals and unforeseen needs, like natural disaster relief, or other causes where his name and likeness can help generate awareness.

Assets: With the receipt of his last paycheck, Mike has sufficient cash in his bank account to fund the $5 million donation. But he also has a significant amount of highly appreciated stock that performed well over the past few years. His advisor explained the benefits of gifting the appreciated securities (instead of cash) to the DAF. After assessing the trade-offs, they determined that giving stocks with a cost basis of 50% of their current market value represented the optimal solution (Display 3). This strategy would allow Mike to receive the same deduction while avoiding embedded taxes on the stocks’ gains, saving him an extra $595,000 in taxes. In turn, he could use the $5 million in cash to repurchase the same stocks, which would reset his basis to the current market price. 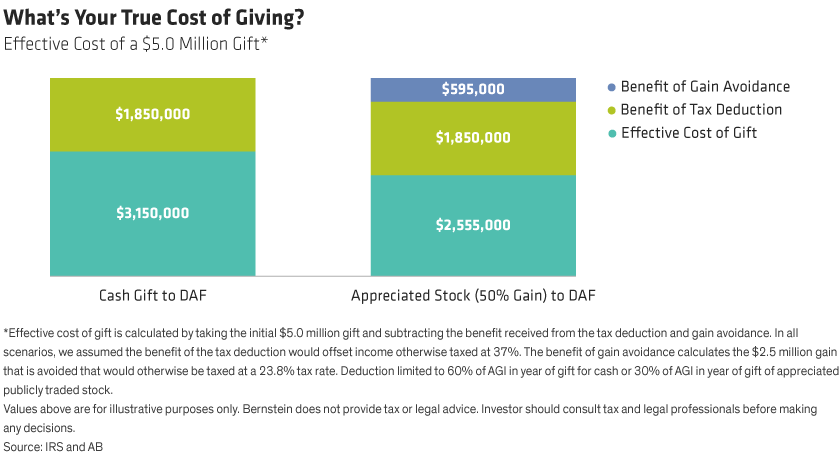 Mike’s situation is not unique. Most retiring athletes can make a similar impact—the key is to plan ahead. That way, whether you’re receiving a signing bonus or selling a business, you’ll be ready to put money in motion to benefit cherished causes while also making the most tax sense. Answering the four “Ws” will get you on your way:

*Deduction is limited to 30% of Adjusted Gross Income (AGI) for gifts of stocks and 60% of AGI for gifts of cash. We assume that Mike’s income is high enough to utilize the full deduction in the gift year.

This material has been distributed for informational purposes only and should not be considered as investment advice or a recommendation of any particular security, strategy or investment product. Information contained herein has been obtained from sources believed to be reliable, but not guaranteed. Bernstein does not provide tax, legal, or accounting advice.

AEF thanks the co-authors for their article: Brad Hawkins, CFP®, Head of Bernstein’s Washington D.C. Office, Stacie Jacobsen, Co-Head of Sports, Media, & Entertainment Group, and Andrew Bishop, CFA, CEPA, Director of Wealth Strategies. Brad is a member of the AEF Council of Advisors.